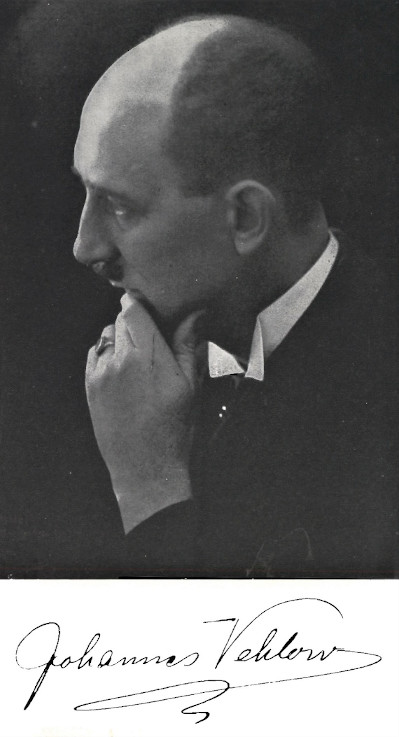 Johannes Vehlow (1890-1958) was an important german astrologer. He is best known for his Lehrkursus der Wissenschaftlichen Geburts-Astrologie (Course for scientific natal astrology) in nine parts. The name of this work is peculiar: Vehlow makes very clear in the same books that he strongly opposes a scientific approach of astrology.
Vehlow studied the houses problem extensively. He is the author of the pamphlet Das Horoskop der Marie A. Peary in which he writes about the chart of the daughter of the famous polar traveler Peary. Marie Peary was born within the polar circle and it was impossible to calculate her chart with most house systems.

Vehlow was an adherent of what he calls the most ancient system of houses: equal houses starting with the ascendant but with the cusps in the center. This is an ecliptical system, and it is easy to calculate above the polar circle. But it is not the oldest system of houses. In particular, the Sign houses are older and the Oktotopos (eight houses) is even more ancient.
Vehlow uses the center of the houses and he gives as the reason for this the Thema Mundi as Firmicus described it. That is a fictional chart for the world, and it shows all lights and visible planets in the center of the signs they rule.
Next to this system (which he calls the mundane chart) Vehlow also mentions an earth chart (the zodiacal signs with the focus on the center of these signs) and a solar chart (with the Sun in the center of the first house).
I will only look at the mundane variant. The earth chart and the solar chart as defined by Vehlow might have their merits for delineation but they are not house systems as there is no relation with the daily rotation of the earth. That does not make them wrong or unimportant, but we cannot consider them being houses.

It is not only Vehlow who proposes this system. Also F. Xavier Kieffer described the same system in 1959 in his La vérité sur la domification. Kieffer also bases his arguments on the Thema Mundi as presented by Firmicus and on the fact he believes this system is the most ancient house system. Just as Vehlow he also uses a system with earth houses and solar houses and does so in exactly the same manner as Vehlow.
Kieffer mentions Vehlow as a learned and perspicacious astrologer but adds that his books were lost in the war. (Kieffer, p. 45).
Koch and Knappich however, mention that Kieffer in 1959 – shortly after Vehlow passed away – declared that Vehlow plagiarized him. (Koch, Knappich, p. 31).
Vehlow published his system in 1933, Kieffer in 1947. I could not find the mentioned text by Kieffer but it looks more applicable that Kieffer plagiarised Vehlow and not the other way around.

The arguments for this house system are not strong. It is not the most ancient system, and it looks far-fetched to use the center of the houses because the Thema Mundi places the planets and ascendant in the center of the signs. But it is possible to find a useful system, even if you use false arguments.

To calculate cusp 1, you need to subtract 15º from the longitude of the ascendant:

You can find the remaining cusps by adding successively 1 sign (30°).

The website http://www.astrologie-chirologie.com/astrologie_2.html provides online versions of all mentioned titles from Vehlow and Wiesel.